Free shipping on orders over $50

Resting on a rack in a corner of his warehouse in Southern California beneath towering shelves of the skin care product that has fetched him millions is the nexus of the many lives of Chris Birchby ’97.

It is a monolith of wood, fiberglass, and foam, crafted by legendary surfboard artist Donald Takayama. Birchby bought it years ago when he still lived in New Jersey, and he rode the board through low-rolling waves off Long Island Sound and steep breakers pummeling Venice Beach in Los Angeles.

Birchby says his Takayama carried him across the continent, through careers as a beach bum, artist, and professional gambler. And now it has brought him here—a few miles down the beach from where Takayama first shaped it decades ago in the town of Oceanside. “The board,” Birchby says, “was calling itself home.”

But home is no longer a small surf shop. It’s the gleaming new 45,000-square-foot headquarters and warehouse of COOLA Suncare, a company Birchby started a dozen years ago in his garage and is now one of the fastest-growing sunscreen companies in the country, if not the world.

Thirty years ago and 3,000 miles to the east, Birchby was a mop-haired Jersey boy from the small town of Ho-Ho-Kus who vacationed every year with his family at his grandparents’ place on Long Island. One summer, he climbed aboard a wind surfer off Sag Harbor and learned to cut across the tides, falling in love with the wind and the waves in the process.

The Birchbys are competitive. His mother’s game is bridge. She’s still adding a mammoth pile of points she began accumulating in those early days at the shore. His grandmother played an equally cutthroat game: poker. 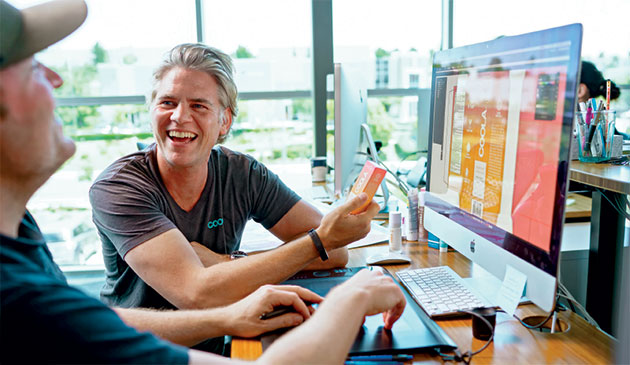 Rainy-day games of Monopoly among Birchby and his brothers were no less intense. He almost always angled for the last of the yellow properties on the board— Marvin Gardens—a nod to his
home state.

Back in Ho-Ho-Kus, Birchby played soccer, basketball, tennis, and track. He served on student council and absorbed himself in art in his spare time. In 1993, he enrolled at Lafayette, unsure at first where he would focus his education.

He and McCue were able to schedule all of their classes at University of Queensland in two days a week. That left five out of seven days free to tool around in a Mitsubishi minivan exploring the country, befriending other students, and surfing.

When Birchby returned to the states, he’d become more serious about art. He hadn’t abandoned fun—he and McCue obtained “Doctor of Mixology” degrees from a two-week course at the Allentown Bartender School. During summers, he returned to Sag Harbor to give windsurfing and surfing lessons by day and tend bar by night.

But he decided that his painting and artistry would be his career. After graduation, he moved to New York to make a go of it as a painter in the city. He worked for a while as an assistant to Steven Meisel, a well-known fashion photographer, and entertained a job offer from an ad agency.

Before long, though, the lure of sunshine and his Takayama came calling again. Birchby was accepted to the MFA program at Art Center College of Design in Pasadena, Calif., and he and his board headed west, where he split his time among classes, painting, and plying the California waves.

One day, a new swell crested, and Birchby angled his board and rode it toward shore.

In a computer lab, Birchby and his classmates had been gathering to explore online gaming—the height of technology at the time. First came real-time strategy games like early versions of Starcraft. Then came an online version of the game his grandmother had taught him years earlier: poker.

After Birchby received his MFA, he moved his painting operations into space in a Santa Monica airport hangar that had been converted into studio space. On the desktop dedicated to office work, he had two monitors—one devoted to his painting career and one spattered with computer-generated images of playing cards.

In the early 2000s, the online gambling industry wasn’t yet regulated as it is today. Hundreds of websites offered games of chance, and online gambling had become a billion-dollar industry. Users from around the world with time and credit to burn competed fiercely for strategies and streaks.

Birchby devoured books on the subject. He became a fixture among online message boards and clubs. He adopted the online handle MarvinGarden, a throwback to his favorite patch of Monopoly real estate. Sometimes, he’d spend almost the entirety of his waking hours on gambling as his winnings rose to hundreds of thousands of dollars.

This new life was cool. It was exciting. But it was not, ultimately, gratifying. “At the end of the day you’re not contributing to society at all,” Birchby says. “While it was really fun, you can feel disgusted with yourself playing poker for 14-hour periods at a time.”

In 2004, he had an idea—help protect the hides of the surfers and sunbathers he had seen so often with a line of top-end organic sunscreens. A group of friends and he gathered at his home outside Los Angeles to discuss the concept and help manufacture test batches. For a time, he stored bottles of those fledgling amounts in his garage.

Sixteen active ingredients, ink a deal with a laboratory or two, and watch the money roll in. What else was there to know? It seemed simple and straightforward.

“I had my hand in so many things,” Birchby says, “and I was so naïve.” Early on, he signed a contract with a vendor who produced gallons of COOLA. When Birchby had his product analyzed, he learned it had no sun protection ingredients. He returned to the manufacturer to demand an answer, only to find out the lab had moved overseas with both the money he had spent as well as any recourse.

Another lab gave him a chemical combination that dissolved the painted labels on COOLA’s bottles if sticky fingers transferred it from the inside to the outside. After time and some legal wrangling, he only got a fraction of that investment back.

During that same period, a change in federal laws governing online poker had caused that once-plentiful well of financing to go dry. Then, early one morning in 2006, Birchby’s phone rang with news that a warehouse fire in the valley had wiped out his inventory.

It turned out to be a stroke of good luck. COOLA at the time contained an ingredient called parabens, a substance pilloried in the press for a possible link to cancer. The fire
gave Birchby and his team a chance to get the formula right this time.

Still, the costs and the loss of poker money was almost too much. The string of setbacks nearly caused Birchby to fold. 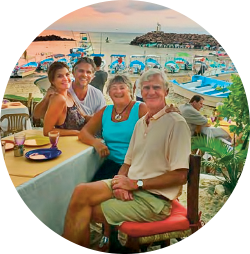 Chris Birchby became serious about COOLA shortly after his parents were diagnosed with
skin cancer.

In September 2007, Birchby had found the wave he’d been waiting for his whole life—the right wave.

To help him change things up dramatically, Birchby brought in big guns for such areas as marketing and management. He instituted concrete goals, sales targets, business objectives. What used to be unfocused brainstorming sessions became Weekly Operations Report meetings. Promotional ideas, delivery tactics, you name it, are added to a whiteboard and each idea is assigned a person responsible and a deadline. If that idea doesn’t happen or if a deadline isn’t hit, the ink color on the board changes from navy to crimson.

Today, COOLA has about $40 million in annual sales, with growth of 162 percent in the past year alone. COOLA products, previously found only in specialty stores, are now on the shelves of such retailers as Sephora and Ulta. COOLA now employs more than 80 people, two of whom—Blanca Martinez and Michelle Harris—have been there since COOLA first started in Birchby’s garage.

“There’s a mission component to it,” Birchby says of the present-day company. “Personally, I need to make this successful.”

That doesn’t mean having fun has lessened in importance. People are welcome to bring their dogs to work, and impromptu rounds of fetch often break out. Surfboards lean against walls throughout the warehouse corner—including the board, the Takayama—giving employees easy access. If the mood strikes them, they can climb into Birchby’s Ford pickup truck and head off to the nearby shoreline (covered with ample COOLA sunscreen, of course).

Everyone in Birchby’s employ is equipped with a FitBit or another variety of a wrist-borne pedometer. It’s a step competition; Birchby and his employees square off to see who takes the most steps. This time, whoever first walks the equivalent of the distance from Carlsbad to Las Vegas—roughly 626,000 steps—wins some modest, yet-to-be-determined prize. In a recent competition, Birchby stayed up late into the night walking around his house to add to his count, baby in arms.

Yes, he recently has become a parent. On April 6, his wife, A.J., gave birth to his firstborn, Bellemy. “It is wild,” he says. “I’m a little later than all my friends, and you just don’t appreciate the magnitude of it.”

Although he still paints and collects art—COOLA’s office walls are full of both his art, as well as works by others—Birchby’s entire focus is on COOLA. “It requires all of my time,” he says. There are road trips, appearances on the QVC shopping channel, and meeting after meeting.

Birchby is a new board member of the Independent Cosmetic Manufacturers and Distributors association as well, a role through which he helps develop policies to change the industry for the better. It’s a very busy life.

But sometimes, Birchby and McCue just go surfing. After all, it’s always just a drive of a few miles from COOLA’s office to the beach, and the Takayama board is always just an arm’s length away. On these days, they clamber down the steep California cliffs to the waves, Birchby holding the board that brought him this far.

As he slides into the water, he looks out at the acres of sea rushing in on him and wonders: So. What’ll it be this time? 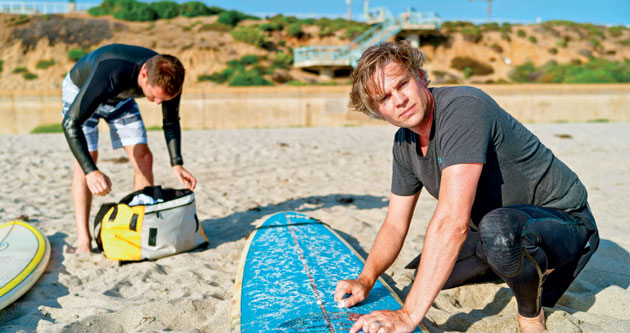